Lets discuss some of these soil properties:

Air Content can be understood as the amount of soil pores present in the soil sample which are NOT filled with water or in turn are filled with air.

Air content is denoted by ac and it is defined similar to the Degree of saturation.

Unless the soil is in super saturated state air and water collectively makes the whole void space available, so summation of air content and degree of saturation will be equal to the unity.

This relationship can be used to solve some mathematical problems.

Percentage Air voids is denoted by na and is defined as the ratio of the volume of voids filled by air expressed as a percentage of the total volume of the soil mass.

Do not get confused with the definitions of Air Content and Percentage Air voids. 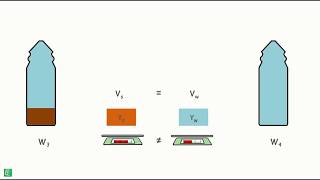