Lets discuss one of these soil properties: Void Ratio.

From this phase diagram we can write void ratio as

We can also write volume of solids as total soil volume minus volume of voids.

Loose soils have relatively high volume of voids so in the equation they have high value of the numerator and hence higher value of void ratio.

And if the same soil is compacted and made dense, it will have relatively small amount of voids and that will make its numerator small and will result in lower value of void ratio.

So for the same soil:

We should note here that every soil will contain some voids in it. It is practically not possible to have void-less soil. Hence there will always be some non-zero value of volume of voids, so void ratio can never be equal to zero. So void ratio will always be greater than zero. 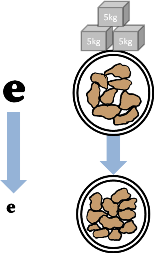 So, what are the applications of the void ratio?

Well there are several benefits and applications of knowing void ratio of the soil.

By knowing the void ratio of soil sample, we may have better control over “Volume Change Tendency” of soil.

If void ratio of a soil is high i.e. the soil is loose, then under loading voids have a tendency to minimize themselves.

So, for soils with high void ratio, civil

engineer may take a decision either to reduce the loading or pre-compact the soil.

If we know the void ratio of the soil we have better control over fluid conductivity and particle movement through its pores, as loose soils show high conductivity while dense soils are not so permeable.